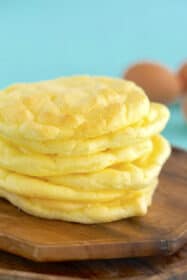 How to Make Cloud Bread with Cream Cheese, Eggs & Cream of Tartar

The BEST keto cloud bread recipe with 3 ingredients and only 0.3g net carbs per piece! A deliciously satisfying, fluffy keto bread option that’s perfect for low carb sandwiches, pizzas, and more. Plus, I love how easy this 3 ingredient cloud bread is to prepare—using just a hand mixer, stand mixer, and the oven. Learn how to make cloud bread with cream cheese, eggs, and cream of tartar in 45 minutes!

When I started Mind Over Munch, this no carb cloud bread was actually one of the earliest recipes I ever shared as part of my 2 Ingredient Takeover series. That was back in 2015, and the recipe was a huge hit—and it’s still popular now! But, it’s been long overdue for a refresh, so I decided to update the original recipe to make it tastier and simpler than ever.

Unlike many other recipes, this 3 ingredient cloud bread recipe has no sugar or sweetener, and it’s made without cornstarch. And this time, I used cream of tartar instead of baking powder—which makes the texture even fluffier! Yes, keto cloud bread does taste different than regular bread, since it’s grain free and has almost no carbs. But, its savory flavor and light, bready bite make it a great low carb bread alternative!

What is cloud bread?

No carb cloud bread is a keto friendly bread alternative—almost like a low carb sandwich thin. It’s also known as oopsie bread, air bread, or a cloud bun. Most recipes involve 2 or 3 ingredients, combining eggs (yolks and whites), a creamy fat source (like cream cheese, cottage cheese, or coconut cream), and leavening (like cream of tartar or baking powder). The result is a batch of fluffy, bread-like rounds with almost 0 carbs!

As the name suggests, keto cloud bread tastes like a savory, fluffy cloud. Some say the taste reminds them of sourdough bread, with some tang from the cream cheese and a hint of savory egg. Although it’s low carb and totally grain free, the texture is surprisingly similar to actual bread. And, it holds up well for sandwiches, toasts, or pizza! You can also add spices or dry herbs to your 3 ingredient cloud bread to create new flavors.

This no carb cloud bread contains 3g fat and almost no carbs, making it an ideal bread option a low carb diet or keto lifestyle. Plus, it’s a naturally grain free and gluten free bread option that’s suitable for those with a food sensitivity. However, that means this keto cloud bread is missing the whole grains and fiber found in regular bread. What’s “healthy” is relative and subjective—choose what suits your body and lifestyle!

What is cloud bread made from?

This 3 ingredient cloud bread is made from eggs, cream cheese, and cream of tartar. Cream cheese and egg yolks provide the sturdy, fat-rich base for the recipe. The egg whites must be whipped to stiff peaks (like when making meringue) to create the fluffy, cloud-like texture. Lastly, a leavening agent like cream of tartar (or baking powder) helps the batter expand, rise, and stabilize.

Yes, cream of tartar is a keto friendly leavening agent, similar to baking powder. Cream of tartar helps baked goods rise and it’s used to stabilize whipped egg whites—like in this fluffy cloud bread recipe. The main difference is baking powder is often a mixture of cream of tartar and baking soda. Both can work in this recipe, but cream of tartar on its own produces finer air bubbles, creating a fluffier texture!

How to Make Cloud Bread

How long do you bake cloud bread?

How to tell when cloud bread is done?

This keto cloud bread is done when it’s firmed up, lightly golden brown, and cooked through completely. The center should not be soft or jiggly—if it is, let them keep baking. When they feel firm, set, and fluffy when pressed, remove from the oven.

Watch how to make cloud bread in my 3 Ingredient Cloud Bread video!

Why is my cloud bread not fluffy?

Since eggs are central to this 3 ingredient cloud bread recipe, it may have a hint of egg flavor. But, if it tastes overly eggy like scrambled eggs, it’s likely due to overmixing the egg yolk mixture into the whipped egg whites. Be sure to gently stir without mixing too much—just until the mixture has a cohesive light-yellow color.

How long can you keep cloud bread? Does it need to be refrigerated?

The texture of no carb cloud bread is best when eaten within 12 hours of baking. To store for later, allow it to cool, then transfer to a plastic bag or airtight container. Stored at room temperature, cloud bread will last for about 3 days. It doesn’t need to be refrigerated, but you can store it in the fridge for up to a week.

Can you freeze keto cloud bread?

Yes—once cooled completely, store low carb cloud bread in a freezer-safe bag with parchment paper (NOT wax paper) between each piece. Freeze for up to a few months.

What is cloud bread good for?

This 3 ingredient cloud bread recipe is a unique grain free, gluten free and keto bread alternative that you can use instead of traditional sliced bread! Whether you have a food sensitivity or follow a high fat low carb lifestyle, it’s great for making gluten free and keto friendly: 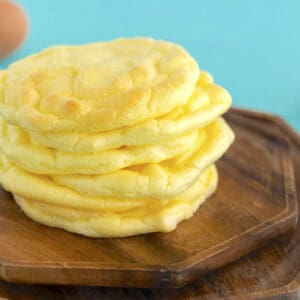