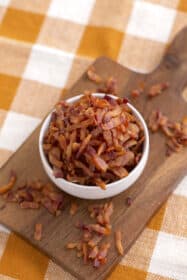 How to Make Bacon Bits from Frozen Bacon in 5 Minutes

The BEST homemade bacon bits recipe for perfectly crispy bacon crumbles at home! Ditch the artificial store-bought version and whip up some REAL bacon bits instead. They’re far more flavorful, with a crispier texture, and they couldn’t be easier to make. Learn how to make bacon bits from frozen bacon in 5 minutes—just chop, sizzle, and enjoy!

Rather than cooking bacon and then crumbling it, this recipe starts with raw frozen bacon that gets chopped into bits. In its frozen form, the raw bacon is easier to manage and cut. And, after just a few minutes in a hot pan, your homemade bacon bits will cook to crispy perfection! Enjoyed fresh or stored for later, they’ll make any meal extra rich and delicious.

The beauty of making these at home is that you can make truly crispy bacon bits with the texture that you enjoy. Or, undercook them a bit if you prefer a softer texture. Whether you’re crumbling a single slice or a whole pack of bacon, you can use the same method described below. If you’re a bona fide bacon lover, now’s the time to learn how to make bacon bits on the stove!

What are bacon bits used for?

Much like bacon itself, bacon bits are delicious added to just about anything. They’re commonly enjoyed as a toping on salads, soups, pizza, baked potatoes, and more! Personally, I made these homemade bacon bits to use in my chicken bacon cheddar dip for a game day snack.

How do they make bacon bits?

Bacon bits are a common packaged item in grocery stores, either sold as a seasoning or a salad topping. But, many of these products contain harmful additives and preservatives—even the brands selling “real bacon bits.” Plus, some brands of bacon bits are made of soy and don’t contain any bacon at all! Instead, this homemade bacon bits recipe uses real bacon and nothing else.

How do you cut raw bacon into bits?

In my experience, the easiest way to cut raw bacon into bits is to chop frozen bacon. If you have a packet of fresh bacon, I recommend freezing it first—it’ll be much easier to chop! Simply allow the frozen bacon to thaw 10 minutes at room temperature, then remove the whole stack from the package. Slice horizontally to create ~¼-inch thick strips, and your bacon bits are ready to cook!

How to Make Homemade Bacon Bits

How to Store Homemade Bacon Bits

How much bacon bits equal a slice of bacon?

Generally, 1 slice of bacon will crumble into about 1 Tbsp of homemade bacon bits. So, using my 10-oz pack of bacon with 10 slices, I made around ⅔ cup of bacon crumbles. This method for how to make bacon bits uses an entire package of bacon, but you can also use the same process to chop and cook just 1 or a few slices of bacon at a time!

What can you eat bacon bits with?

Again, you can enjoy your crispy bacon bits with any dish that you like to pair bacon with! Or, sprinkle them into a dip or baked good to add some rich, savory goodness. Here are a few ideas:

See how to make bacon bits on the stove in my Super Bowl Party Food video! 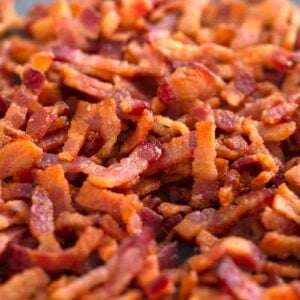 Serving: 1Tbsp, Calories: 70kcal, Protein: 2g, Fat: 7g
Author: Alyssia Sheikh
Course: Side Dish
Cuisine: American
Did you make this recipe?Share a photo and tag us @mindovermunch — we can’t wait to see what you’ve made!