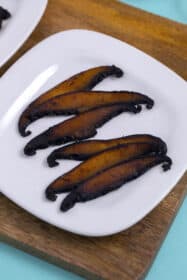 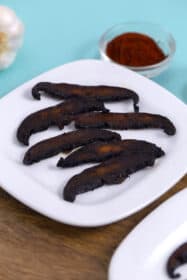 How to Make Vegan Bacon with Portobello Mushrooms

An irresistibly crispy, smoky, vegan mushroom bacon recipe made with portobello mushrooms and a simple marinade! After baking or pan searing, mushroom slices dehydrate to a deliciously crunchy texture, soaking up all of the smoked flavors in the marinade. Learn how to make portobello bacon in the oven or on the stove. The perfect vegan breakfast side dish!

Typically, a vegan bacon recipe will use a plant-based protein made of pea or soy as the base. I’ve even made a vegan tempeh bacon that turns out deliciously crispy and flavorful! But, if you want an option without soy or grains, or if you just want a simpler option, this mushroom bacon recipe is worth giving a try. All you need are portobello mushrooms and your marinade!

I’ll show you how to make mushroom bacon in 2 tasty ways: baked in the oven, or pan seared on the stove. The oven baked portobello bacon takes a bit longer, but it’s my favorite: the most flavorful, smoky, and crunchy! The pan seared mushroom bacon is quicker to make and very flavorful, but only lightly crispy. Try whichever cooking method you prefer—or try both!

Portobello mushrooms are known for their chewy, meaty texture and intense flavor. They have a rich, earthy, savory taste that makes them a perfect plant-based ingredient to use for vegan burgers, or this vegan bacon recipe! Sliced portobello mushrooms act like a delicious sponge, soaking up all of the smoky goodness from this mushroom bacon marinade.

Beyond their deliciousness, portobello mushrooms are also highly nutritious. They’re low in calories and carbs, yet rich in fiber and they even offer some protein. Plus, portobellos contain numerous B vitamins that support energy and metabolism, as well as minerals like potassium, selenium, and copper. They’re also a great source of free-radical scavenging antioxidants!

How to Make Crispy Mushroom Bacon

How to Cook Portobello Bacon on the Stove

For a quicker but less crispy option, you can also cook vegan mushroom bacon on the stove. Simply heat oil on a griddle or in a pan over medium heat, then add the marinated mushroom strips. Turn the heat up to high and cook for 4-7 minutes on each side, until browned and beginning to crisp. These won’t crisp as much, but they will be extremely smoky and flavorful!

This smoked mushroom bacon recipe has a genuinely smoky, savory flavor and an unbelievably crunchy texture—particularly when baked in the oven. Really, it has the crave-able flavors of traditional bacon, but with the texture of a crunchy treat (rather than a chewy slice of meat)! The perfect vegan bacon alternative to satisfy your savory cravings.

Which cooking method is tastiest?

Overall, our team preferred the oven baked portobello bacon because of its flavorful, bacon-y bite and its incredibly crunchy texture! The pan seared version was quicker to make and super tasty, with all the marinade flavors infused into the mushroom. However, the texture was much more tender and mushroom-like, without the crispiness we crave in a slice of bacon.

See how to make mushroom bacon in my Vegan Bacon video! 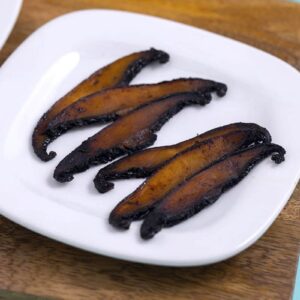