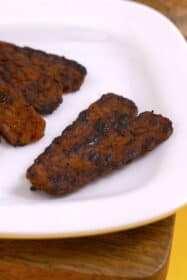 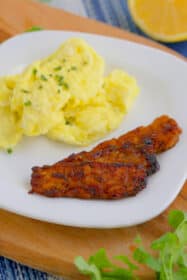 The very BEST tempeh bacon recipe that’s irresistibly crispy, totally plant-based, and gluten free! A deliciously smoky vegan bacon with a simple marinade—made of coconut aminos or soy sauce, maple syrup, and liquid smoke. The perfect side to serve with a tofu scramble! Learn how to make tempeh bacon on the stove or baked in the oven in just 30-40 minutes.

If you’ve never tried it, tempeh is a plant-based protein made from fermented soybeans. It comes in a cake-like block with a hearty texture and a mildly nutty, earthy flavor similar to mushrooms. On its own, tempeh has a pretty neutral taste—making it the perfect base for the smoky flavor in this vegan bacon recipe! Thinly sliced, tempeh will cook to a perfect crispiness.

I’ll show you how to make tempeh bacon two different ways: pan seared on the stove, or baked in the oven. The stovetop method is quicker, and results in a more flavorful but less crunchy vegan bacon. The oven baked method takes longer, producing a more crunchy and smoky tempeh bacon with less flavor balance. Try whichever method you prefer—or try both!

What is vegan bacon made of?

Generally, vegan bacons are made of plant-based ingredients like soy or peas, often with wheat or potato starch. I’ve also made a tasty portobello mushroom bacon that turns out fantastically crispy! For flavoring, any vegan bacon recipe requires a marinade with savory, smoky flavors like soy sauce, liquid smoke, smoked paprika, garlic, and sometimes hot sauce.

What is tempeh bacon made of?

Similarly, this vegan tempeh bacon recipe soaks tempeh in a smoky marinade! Tempeh is made of fermented soybeans, often combined with grains like rice, wheat, or barley. (I used a gluten free tempeh made with brown rice from Lightlife.) The marinade consists of coconut aminos or soy sauce, maple syrup for sweetness, liquid smoke for smokiness, and an array of spices.

Which is healthier tofu or tempeh?

Both tempeh and tofu are quality sources of protein, as well as essential minerals like iron, magnesium, manganese, phosphorus, and zinc. Tempeh offers slightly more protein, fiber, and healthy fats per ounce. And, it’s a fermented food that can support digestion and gut health. Tofu, on the other hand, offers a bit more calcium and is lower in carbs. However, the hearty texture of tempeh makes it the best choice for this vegan bacon recipe!

How to Make Tempeh Bacon

How Long to Cook Tempeh on the Stove

To prepare vegan tempeh bacon on the stove, heat oil on a griddle (or in a pan) over medium heat. Add the marinated tempeh, turn up the heat to high, and cook for 3-4 minutes on each side. Once browned and crisp to your liking, transfer to a paper towel to cool.

How Long to Bake Tempeh Bacon

To prepare smoky tempeh bacon in the oven, preheat the oven to 400°F (200°C) and prepare a baking sheet with parchment and a wire baking rack on top. Place the tempeh in a single layer on the baking rack, leaving some space in between. Bake for 18-20 minutes, until browned and crispy. (Flip tempeh halfway if you don’t have a wire baking rack!)

After cooking, this vegan tempeh bacon recipe has a perfectly smoky, savory flavor with a satisfying hint of sweetness. Texture-wise, it can range from moderately crispy to very crunchy, depending on the chosen method for cooking tempeh. If you’re not a fan of the texture of real meat, don’t worry—this vegan bacon has a bacon-y flavor but doesn’t feel like eating meat!

Which cooking method is tastiest?

Overall, our team preferred the taste of tempeh bacon on the stove. It held onto the marinade flavors the best, with more of the sweetness, spice, and smokiness coming through. However, in terms of texture, the oven baked method was by far the crunchiest! It dried out almost like a bacon jerky, with a noticeable smokiness but less flavor overall.

See how to make tempeh bacon in my Vegan Bacon video! 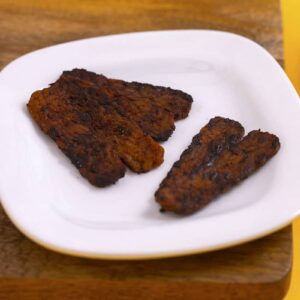 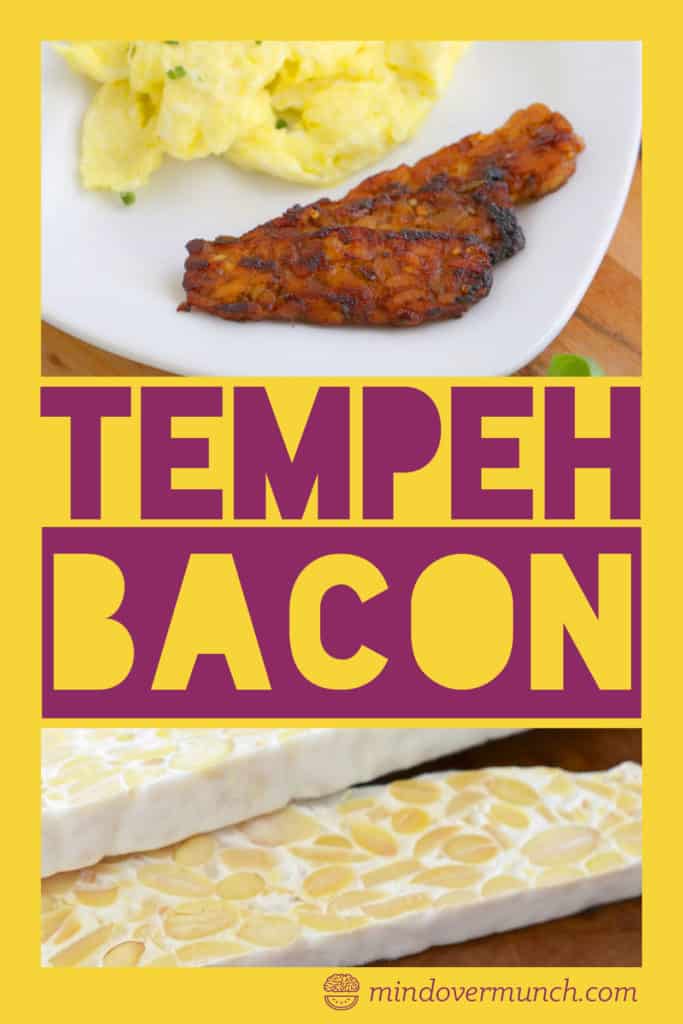 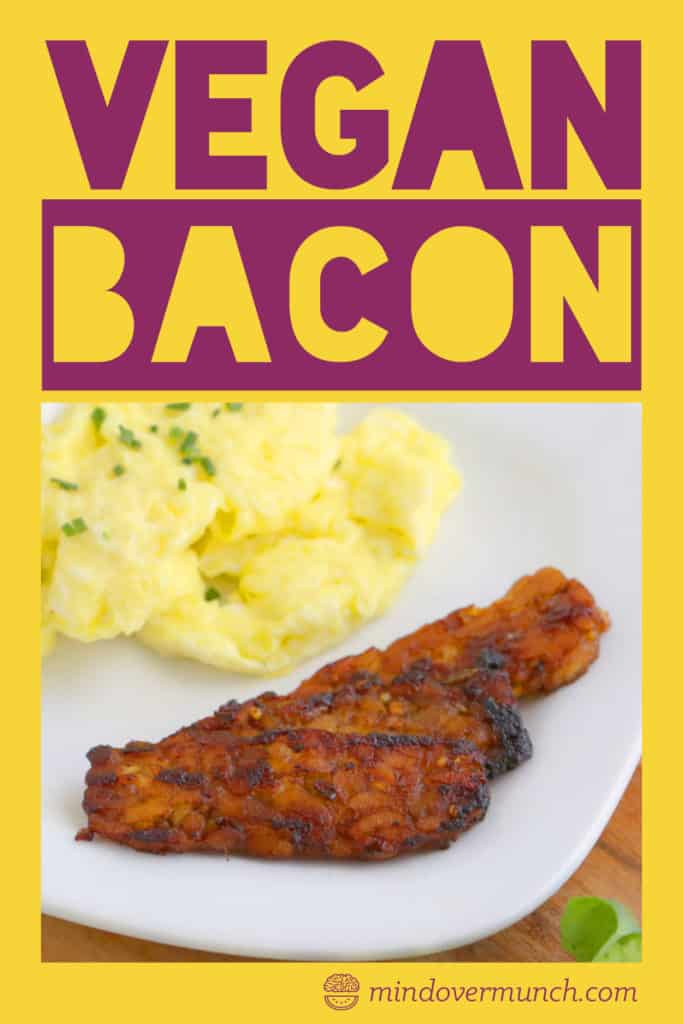 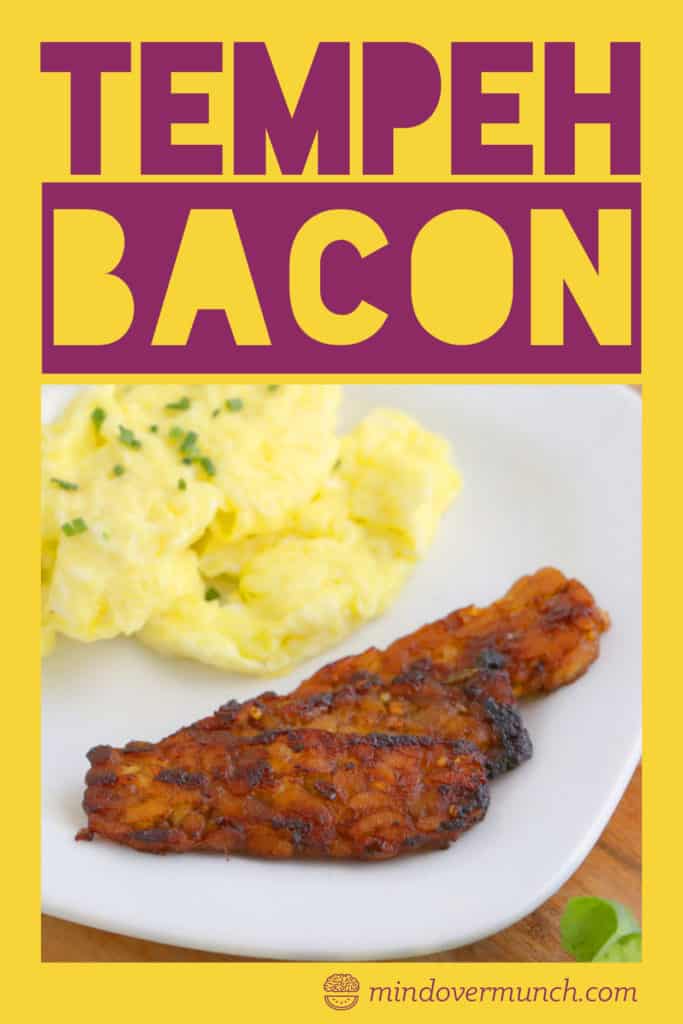