Crafting a gluten free bread recipe that’s soft, fluffy, and slice-able for sandwiches is challenging enough on its own.

But, making a VEGAN gluten free bread recipe that doesn’t taste like cardboard? Faghedda bout it! Or so I thought…

Homemade vegan bread can be gluten free AND taste amazing—and this buckwheat and brown rice flour bread is all the proof you’ll need! It’s perfectly soft, has a fluffy-yet-hearty bite, and a delicious hint of sweetness which I love.

And, similar to a pumpernickel bread made with rye flour, the nutritious buckwheat flour gives this loaf its darker color.

All of the yumminess I expect from a classic sliced bread, but with no gluten, no eggs, no dairy, no oil, and no yeast involved in the recipe!

So, after trying out recipes and some serious experimenting in the kitchen, I finally cracked the code! And, I discovered a few secrets to making truly delicious homemade bread—even without the gluten, eggs, and yeast…

How to Make Vegan Gluten Free Bread without Yeast, Eggs, or Oil!?

Honestly, this vegan gluten free bread is one of the easiest homemade bread recipes EVER.

No yeast means no hours of waiting around for your dough to rise, you don’t need a bread machine, and you don’t even have to knead the dough at all!

The trickiest part—baking your loaf with a foil tent on it, then removing the tent halfway through—isn’t even so tricky… Plus, after trying several vegan gluten free sandwich bread recipes, this is the first one that actually holds together and doesn’t crumble when I slice it.

Obviously, for any kind of gluten free bread recipe, all-purpose and whole wheat flours are no-gos.

You could opt for a gluten free all-purpose or bread flour, or a gluten free baking blend. But, these are generally still highly refined flours that are lacking the nutrients that whole grain flours contain.

So, to keep this vegan gluten free bread recipe as nutritious as possible, I settled on a combination of whole grain flours: buckwheat and brown rice flour!

Since they’re made from unhulled buckwheat groats and unhusked brown rice, these flours are far richer in fiber and essential micronutrients than refined flours.

Brown rice flour is a tried-and-true gluten free option, with a richer, nuttier flavor than wheat flour. But, it’s also a bit denser than wheat flour, so it often results in a dry, crumbly texture when used on its own. That’s why it’s best to combine it with another, lighter gluten free flour, like buckwheat flour!

The name sounds deceiving, but buckwheat actually doesn’t contain any wheat or gluten at all.

If the darker color is a bit surprising, don’t fret. It’s actually a good sign!

You can find light buckwheat flour with a more golden color, if you prefer. But, dark buckwheat flour is the most nutritious and fiber-rich because it’s made using unhulled buckwheat!

Traditionally, bread recipes need yeast in order to get the dough to rise.

But, it’s best to have some gluten in your dough so the yeast can work its magic properly. And, I personally don’t want to wait around for a yeast dough to rise… So, how can we get this vegan gluten free bread dough to rise?

If you’ve dabbled in homemade baked goods of any kind, you’ve probably used leavening agents before.

Without getting into too much chemistry, both contain sodium bicarbonate, which helps to enlarge bubbles in the dough when it bakes and results in a fluffier texture.

(NOTE: Baking powders contain some form of starch—some brands use cornstarch, others use wheat starch. To be sure your homemade vegan bread is 100% gluten free, make sure your baking powder doesn’t contain wheat starch!)

These leavening agents can help all sorts of baked goods rise, but they’re often not enough to make a dense bread dough light and fluffy.

When I’ve made other yeast free gluten free bread recipes like my low carb almond flour bread, I relied on eggs to provide that fluffy boost…

But, what to do for a gluten AND egg free bread?

For this vegan gluten free bread recipe, you’ll need to mix ⅓ cup of ground flax with some warm almond milk to create an egg replacement. Just be sure to let it sit for 5-10 minutes so it has time to gel.

When mixed in liquid, ground flaxseed expands and thickens to become more viscous—much like the texture of an egg! Also similar to eggs, flaxseed is rich in dietary fats, which helps lighten up the texture and hold the dough together.

Still, this flax egg trick isn’t enough to get this vegan bread to rise…

#4 The Secret Behind Gluten Free Egg Free Bread (that Doesn’t Taste like Carboard):

We need some help from our 2nd secret ingredient: xanthan gum, a popular additive used in gluten free baked goods for stretchiness and elasticity. The name may sound unsettling, but it’s surprisingly well-researched and considered safe.

Xanthan gum actually a soluble fiber, like the fiber we get from fruits and veggies that aids in digestion.

And, the most common potential side effect reported is an upset stomach, when consumed in large quantities. (The 1 teaspoon in this entire bread loaf definitely doesn’t meet that high-intake level.)

To make xanthan gum, sugar is fermented by bacteria (Xanthomonas campestris) and a goo-like substance is produced.

Then, that goo is solidified, ground, and sold as a cream-colored powder known as xanthan gum. (I got mine from Bob’s Red Mill!)

But, that magical goo-like texture is the final piece of the puzzle, providing the delicious elasticity and fluffiness this vegan gluten free bread needs!

No eggs, no dairy, no oil, no yeast, and NO gluten. Yet, fluffy and delicious like you won’t believe—until you taste it! (Which, I highly recommend you do, ASAP.) 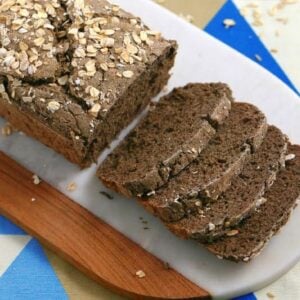 Based on feedback from other people who have tried this recipe, here are some substitutions they’ve found success with:
Serving: 1slice, Calories: 119kcal, Carbohydrates: 22g, Protein: 4g, Fat: 2g, Fiber: 3g, Sugar: 2g
Author: Alyssia Sheikh
Did you make this recipe?Share a photo and tag us @mindovermunch — we can’t wait to see what you’ve made!