What I Eat In A Day: PALEO-ish Edition #kickstart2019

When you’re eating Paleo and that burger-and-fries craving strikes…what to do? Try this caveman-style twist: my bunless bison burger and sweet potato mash! Meaty, umami, and satisfyingly starchy, this fuel-filled lunch option is totally ancestor-approved—and perfect for a Paleo meal prep!

Personally, I really enjoy eating Paleo (or Paleo-ish) because it helps me to focus on food as FUEL. Even though there are restrictions on the Paleo diet, I generally don’t feel restricted when I’m eating Paleo meals. In part because I’m eating satiating meals and wholesome foods that my body appreciates!

But, even if I’m not battling off cravings, there are still some not-so-healthy foods that I’ll always love. Like a burger and fries… Luckily, this Paleo bison burger and sweet potato mash lets me satisfy that occasional longing, while still keeping it clean and healthy. Plus, bison is a tasty change of pace from a traditional beef burger, and it’s also highly nutritious!

What Is Bison? Bison vs Buffalo

Bison are large, furry hoofed animals—often referred to as buffalo in the U.S. and Canada, but the two actually aren’t the same.

In parts of Africa and Asia, you’ll find several species of buffalo, which have short fur and noticeably longer horns. But, bison have a fuzzier coat and big shoulder hump, with the most common species (the American bison) found only in North America.

So, if you’re in the U.S. or Canada and you happen to come across a fuzzy ’buffalo’…know that it’s most likely a bison!

Both buffalo and bison belong to the same family (Bovinae) as domestic cattle, a.k.a. beef. In terms of taste, bison tends to have a richer, sweeter flavor than beef. It pairs beautifully with the sharp bite of Dijon and fresh rosemary in this bison burger recipe. And, contrary to popular belief, it really doesn’t taste gamey at all!

You can really use any ground meat you want, but bison is a really tasty option if you’re looking for something new. But, since bison is leaner than most cuts of beef, I do find that this bison burger is a bit tougher and coarser in texture. Of course, it’ll all depend on how you cook it! (More on that in a moment.)

As mentioned, bison is a leaner protein—with about 6g of total fat per 4 oz, compared to 12-13g in the same serving of beef. That makes bison leaner than even 90% lean beef, and pretty similar to 90% lean turkey burgers. So, if you’re looking for an alternative to beef that’s lower in fat, bison could be a great option!

Some people also argue that bison is more nutrient-dense, and has some additional nutritional advantages over beef. Compared to standard ground beef, ground bison generally:

Bison vs Beef – Which is Healthier?

Above all, the biggest argument for bison over beef is that it’s a cleaner meat option. The majority of bison meat comes from grass-fed animals. Since beef is sold and consumed in such large quantities, most of the beef available in grocery stores comes from grain-fed cows. And, that unnatural diet of soy and corn results in meat that is higher in inflammatory omega 6s.

Plus, to keep costs lower, many farms use harmful antibiotics and added growth hormones to increase the size of their cows. But, there are actually federal regulations that prohibit farmers from using antibiotics and hormones in raising bison. So, comparing the average bison meat to the average beef in a grocery store, it’s more likely that the bison will be a cleaner choice.

That being said, many of the nutritional differences noted above only exist because bison are far more likely to be grass-fed. And, whether it’s bison or beef, animals that are raised on pastures eating their natural diet tend to be more nutrient-dense. So, if you’re able to find it and splurge for the higher price, you can find grass-fed beef that’s just as clean and nutritious as bison.

If You Can, Choose Grass-Fed Over Conventionally-Raised Livestock

Just like grass-fed bison, grass-fed cows have a much healthier omega 6 omega 3 ratio. (Although, neither grass-fed beef nor bison are considered quality sources of omega 3s, like salmon and other fatty fish are.) And, opting for organic grass-fed beef means you can also avoid the mess of antibiotics and hormones that are used on traditional farms.

Overall, beef and bison are both extremely nutrient-rich, with very similar micronutrient profiles. Both are excellent sources of energizing B vitamins like B6 and B12, zinc, niacin, riboflavin, and iron! The biggest difference is in the fat content, with most cuts of bison being significantly leaner than beef.

How to Cook Bison Burgers

You could bake these burgers if you’re trying to streamline your Paleo meal prep and don’t want to bother with cooking over the stove. But, I highly recommend pan-frying or grilling! It’s really quick, and I think it’s worth the added flavor and getting that crispy, caramelized texture on the outside of the meat.

I just melt a little ghee on my indoor grill pan, add my bison burger patties, and cook for 5-6 minutes. Then, I flip ‘em over, and they really only need 2 minutes or so on the other side. Remember, bison is a leaner meat, so it will cook a bit faster than beef! And, I personally think it tastes best cooked to about medium-rare.

Served over a bed of arugula, topped with sliced tomato and avocado, I don’t even miss the bun! With some mashed sweet potatoes on the side, I’ve got a comforting, flavorful, and EASY Paleo lunch that I could eat over and over again. 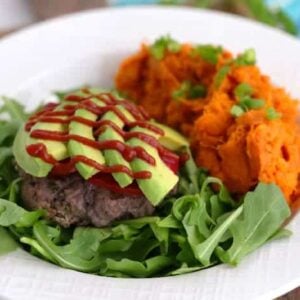