A hearty beef pot roast is one of the most comforting one pot meals of all time—and one of my all-time favorites! In this Dutch oven pot roast recipe, I’ll show you how to slow cook pot roast in the oven until it’s irresistibly tender and juicy. But, if don’t have or don’t want to use a Dutch oven, I’ll also be sharing how to cook pot roast in a crock pot or slow cooker!

I LOVED eating this beef chuck pot roast with potatoes and carrots when I was a kid. And, as an adult, pot roast has become one of my go-to healthy one pot meals because it’s so satisfying and so EASY to make. Whether it’s a Dutch oven pot roast or crock pot roast, both methods are equally simple—and the result is equally delicious!

If you take the Dutch oven pot roast route, you’re tossing everything into a Dutch oven and then cooking it in your actual oven. On the slow cooker pot roast route, toss it all in the crock pot to cook. For maximum flavor, I do recommend briefly searing the meat and sauteeing the veggies before slow cooking everything. But, it’s an optional step that you’re welcome to skip!

Best of all, in childhood and adulthood, a healthy pot roast dinner is one of the BEST (and tastiest)ways to fit more veggies into my day. All of those tender, sweet carrots and savory potatoes, slow cooked with that rich, flavorful beef and loads of fragrant herbs—it’s a mouth-watering meal that never gets old!

What is the Best Meat for Pot Roast in a Dutch Oven?

Whether you’re making a Dutch oven pot roast or a slow cooker pot roast, the specific cut of meat isn’t as important as how the meat is cooked.

Basically, you’re taking a big cut of beef, putting it in a pot with some cooking liquid and seasonings, and slow-cooking ‘til it’s tender enough to melt in your mouth. But, because of that low temperature and longer cooking time, some cuts are better for pot roast than others.

Generally, the best meat for pot roast is any tougher cut—meaning lean cuts with very little fat, lots of connective tissue, and lots of collagen. During the longer cook time, the collagen breaks down into gelatin and the tougher meat becomes irresistibly tender and juicy.

In my opinion, the best meat for pot roast is a chuck roast of some kind. I’m using a boneless chuck roast for this Dutch oven pot roast recipe, but you could also use a chuck shoulder roast, beef chuck arm, or shoulder steak.

Or, if beef chuck pot roast isn’t your thing, brisket, rump roast, or bottom round can also make for a tasty pot roast!

Another reason that a healthy pot roast dinner is a winner: there’s not much prep to do! Since the best cut of meat for pot roast is any tougher, leaner cut, it shouldn’t have much fat on it to begin with. Plus, any fat that is there will only add to the richness and flavor in your Dutch oven pot roast as it slow cooks, so no need to trim it.

Whichever pot roast meat cut you decide to use, the only real prep you’ll DEFINITELY want to do is season your roast liberally before you begin cooking it. It doesn’t need to be fancy! Simple salt and pepper are enough to bring out the natural flavors, and it’ll soak up loads of flavor from your other pot roast seasonings while cooking.

Just be sure to season BOTH sides of your roast!

Remember, the key to a tender pot roast is slow-and-low cooking: a lower cooking temperature and a longer cook time.That’s why I prefer to slow cook pot roast in the oven or in a crock pot, and it’s always worth the wait!

For this Dutch oven pot roast or cooking any pot roast in the oven, my recommended temperature is 275°F (135°C). Or, set your slow cooker / crock pot roast to cook on low heat instead of high.

Yes, that lower pot roast temperature means it will need to cook for some hours. But trust me, your chuck roast will turn out SO much more flavorful and succulent!

How to Make Pot Roast the Simplest Way vs. the Most Flavorful Way

For the simplest route, toss that seasoned roast and all of your other pot roast ingredients straight into the Dutch oven or crock pot. No searing, sauteing, or pre-cooking of any kind—everything goes in raw and uncooked. After cooking low-and-slow, it’ll all cook through just fine and taste great.

BUT, your healthy pot roast could be even MORE flavorful with only 5-10 minutes of extra work! The secret is searing your beef roast and sauteing the veggies before slow cooking them in the oven or crock pot.

It’s an optional extra step, but the few minutes are worth the maximum deliciousness in my opinion!

To start, heat your Dutch oven over medium-high heat on the stovetop and add a bit of oil. Then, toss in your sliced onions, celery, and carrots, and saute those veggies for a few minutes. (If slow cooker pot roast is more your style, simply do this step in a separate pan!)

Once fragrant and becoming tender, remove the veggies from your Dutch oven or pan and set aside temporarily.

Next, with your Dutch oven or pan still over heat, sear the meat! Add your entire roast into the hot pan and cook for a minute or two on each side, using tongs to flip. It doesn’t need long—just until each side is lightly browned.

While the meat is searing, take a moment to whisk together your pot roast seasoning mixture: broth, balsamic vinegar, Worcestershire sauce, and Djion mustard. You want this ready to go when the meat is done!

After searing, remove the meat and pour in your pot roast seasoning mixture, deglazing the pan. Give it a good whisk, scraping any goodness that’s stuck to the bottom and mixing it in for added flavor.

For the Dutch oven pot roast recipe, leave that seasoning mixture right where it is and add your seared meat back into the pan. Make sure half of the roast is covered with liquid, adding a bit more broth if needed. Then, dump your sauteed vegetables on top of the meat.

Then, since pot roast with carrots and potatoes has been my favorite since childhood, I had to add some baby potatoes into this Dutch oven pot roast as well!

Just toss the potatoes with oil, salt, and pepper in a separate bowl, then add them into the Dutch oven. I like to use petite potatoes because I can keep them whole and they won’t turn to mush after the slow-and-low cooking.

Last but not least, all of the best pot roast recipes need some fresh herbs! I added a few sprigs of fresh thyme and rosemary into my Dutch oven pot roast before closing it up—feel free to use whichever herbs you like.

Now, put the lid onto your Dutch oven or slow cooker and you’re ready to cook! The other major difference between these two cooking methods is how long to cook pot roast in the oven vs. in a crock pot or slow cooker.

You’ll know your Dutch oven pot roast or crock pot roast is done when the meat is crave-ably tender and falling apart! (If you’re unsure, use two forks to test the meat and see how easy it is to shred.)

Straight from the Dutch oven or crock pot, your healthy pot roast dinner is ready to serve!

If you use a 4 lb roast like I did, you’ll likely have enough to feed a crowd—and still have leftovers… My 4 lb beef chuck pot roast yielded around 3 lbs of cooked meat, which is around 12 servings. The servings will ultimately vary based on the weight of your original roast, but safe to say: there’ll be plenty of food!

An awesome one pot dinner idea for a family that’s also great for weekly meal prep purposes. Or, try this healthy pot roast recipe at your next holiday gathering for a more nutritious feast—that’s just as comforting and satisfying! 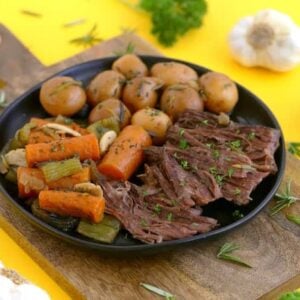 How to Cook Pot Roast in a Dutch Oven

How to Make Pot Roast in Crock Pot or Slow Cooker

*Number of servings will vary based on the size/weight of your roast. Nutrition provided below per meal: ~4 oz cooked pot roast with carrots and potatoes
Serving: 1meal, Calories: 421kcal, Carbohydrates: 13g, Protein: 29g, Fat: 27g, Fiber: 2g, Sugar: 3g
Author: Alyssia Sheikh
Did you make this recipe?Share a photo and tag us @mindovermunch — we can’t wait to see what you’ve made!

12 Comments on “Dutch Oven Pot Roast with Potatoes and Carrots”

END_OF_DOCUMENT_TOKEN_TO_BE_REPLACED 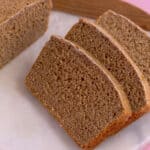