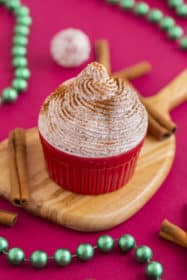 How to Make Whipped Cream with Cinnamon, Allspice, Cloves & Nutmeg

A lusciously light, comforting holiday spiced whipped cream recipe made with cinnamon, allspice, cloves, and nutmeg! Satisfyingly simple to make, and oh-so-fun to serve on top of your favorite holiday desserts. Learn how to make homemade whipped cream with a stand mixer or hand mixer and a dash of holiday spice.

I love store-bought canned whipped cream and cool whip, but nothing quite compares to making it at home with heavy whipping cream. It’s so fun to watch it whip up, it has a deliciously fluffy yet light texture, and you can adjust the sweetness and flavors! This cinnamon whipped cream is an elegant yet easy addition that can take cupcakes, shortcake, pumpkin pie, or any holiday dessert to the next level.

I designed this holiday spiced whipped cream recipe to pair with my caramel apple trifles, but it’d be wonderful served on all sorts of treats. And, if you want to change up the flavors, experiment with other spices! (Pumpkin spice, anyone?) In just 5 minutes, you can whip up a comforting, festive, flavored whipped cream at home.

What is the secret to whipping cream?

There are a few secrets behind making the best homemade whipped cream possible:

How do you know when whipped cream is done?

You can beat heavy whipping cream to all sorts of different consistencies. For this holiday spiced whipped cream recipe, we’re looking for stiff peaks. This means, if you take your whisk out of the cream, the peaks will hold firmly but with slightly softened tips. In my electric stand mixer, this took around 5 minutes—but it can take up to 7 or 8 minutes, depending on your chosen method.

How to Make Spiced Whipped Cream

How to Make Stabilized Whipped Cream

I used this homemade spiced whipped cream almost immediately in my caramel apple trifles recipe, and it tasted fantastic. However, if you want a homemade whipped cream that can be stored longer (a few days) in the fridge and retain its fluffiness, consider making a stabilized whipped cream. Simply add ¼ teaspoon of cream of tartar to the recipe alongside the other ingredients.

Download this and loads of other festive recipes in my FREE 12 Days of Dried Fruit Holiday eBook!

To see how I make this holiday whipped cream, watch my Easy Holiday Desserts video!