Plus, it’s also a completely vegan pumpkin pie recipe, made with 100% plant-based ingredients. (Which makes it the best and only VEGAN KETO pumpkin pie I’ve evermade!)

The vegan pumpkin pie filling is made with coconut cream and no eggs, but it still turns out perfectly smooth, creamy, and indulgent—like a genuine custard filling should be. And, unlike many keto pumpkin recipes out there, I’ve made this gluten free sugar free pumpkin pie with REAL pumpkin puree so it’s authentically delicious!

That luscious filling gets baked into a gluten free low carb pumpkin pie crust made of almond flour, coconut oil, and a flax egg to keep it vegan. Not only does almond flour keep this recipe low in carbs and grain free, but it’s also comfortingly crisp and nutty. And, it actually doesn’t crumble when sliced!

With just 4g net carbs and 16g of fuel-filled fats per slice, this is a keto friendly pumpkin pie that’s actually keto friendly. Serve topped with a dollop of whipped coconut cream for the ultimate vegan keto pumpkin pie experience!

How to Make Vegan Keto Pumpkin Pie that Tastes LEGIT

Looking at a traditional pumpkin pie recipe (or even a HEALTHY pumpkin pie recipe), it seems pretty impossible to craft an alternative that’s both vegan AND keto friendly… If you have to replace the butter, the eggs, all of that sugar, and even the carb-rich pumpkin—will it even be a pumpkin pie anymore??

I promise, it CAN be done. We just need to get a bit creative with our ingredients.

First, here are a few tips that I’ve learned along the way to help you make this vegan keto pumpkin pie with best results:

First, here are a few tips that I’ve learned along the way to help you make this vegan keto pumpkin pie with best results:

TIP #1 Bake this Vegan Keto Pumpkin Pie at Least 1 Day Before you Plan to Serve!

This is a simple tip but a crucial one, which is why I want to emphasize it first. Many people plan to make a healthy pumpkin pie on Thanksgiving or on the day of a holiday gathering, but I’ve found that this vegan keto pie does best when baked 1 day ahead of time.

If you give your low carb pumpkin pie enough time to cool and fully set in the fridge overnight, you can serve up perfect slices to your guests. So be sure to plan ahead!

I recommend letting your pumpkin pie cool completely at room temperature first. Then, transfer to the fridge to set overnight—for about 10-12 hours.

Now, if you’re in a time crunch and can only refrigerate for a few hours, it may not be a problem at all! Just a friendly warning that rushing the cooling process may result in crumblier, less-perfect slices.

Many folks consider prebaking to be an unnecessary extra step, so of course feel free to skip if that’s how you roll. But, I personally think a quick prebake helps this vegan keto pumpkin pie crust to maintain its integrity!

I recommend pressing your gluten free low carb pie crust dough into your pie dish, covering with parchment, and then weighing it down with pie weights of some kind—dry beans or dry rice will work. Then, just pop in in the oven for about 12 minutes to prebake.

Remember, we’re working with a gluten free low carb pie crust recipe, which doesn’t feature the typical baking ingredients used in a traditional pie crust. Being patient while it cools means you’re less likely to end up with a crumbly crust!

One last tip: about 15 minutes before your low carb pumpkin pie is done baking, you may want to cover the edges of the crust with foil, or a silicone pie crust shield. This will prevent it from browning too much or burning while the pie finishes baking!

So, how to replace the classic fat sources with plant-based alternatives, while also not relying on those carb-heavy starches? For a fat-rich but totally dairy free pumpkin pie recipe, I went with full-fat coconut cream instead!

You could also use full-fat coconut milk (though I personally recommend coconut cream, if you can find it)—just don’t use a “light” a.k.a. low-fat coconut milk. For a truly keto pumpkin pie and to get that indulgent, custard-like texture, FULL-FAT coconut cream or coconut milk is a must. You want and need those nutritious fats!

As for the starches…

I’d never even heard of glucomannan powder until I made this low carb vegan pumpkin pie for the first time, but it’s actually a pretty awesome ingredient. If you’re on a ketogenic diet, or especially if you’re into vegan keto desserts and homemade baked goods, it’s worth adding to your pantry!

Basically, glucomannan powder is a dietary fiber made from the root of the konjac plant, and it becomes thick and viscous when combined with liquid. It’s a great substitute for cornstarch in this vegan keto pumpkin pie because it’s rich in fiber and you can use far less of it, so it doesn’t add as many carbs to the recipe!

Now, you could substitute for the 2 tsp of glucomannan with ¼ cup of cornstarch if you’d prefer. But, just know that amount of cornstarch will add about 30g of total carbs to the recipe—not ideal for a keto friendly pumpkin pie that’s meant to be low in carbs.

A homemade pie crust is really essential for this vegan keto pumpkin pie because you’ll be hard-pressed to find a premade crust that’s both vegan and low carb. So, to vegan-ize (and health-ify) a traditional pie crust, I had to swap out the butter, shortening, and/or eggs for cleaner, plant-based fat alternatives.

First, start by making a flax egg—combine 2 Tbsp ground flaxseed with ¼ cup water—as a vegan egg alternative. Mix to combine and let that sit for about 10 minutes to thicken.

Once it’s ready, add your flax egg to a food processor along with the remaining gluten free low carb crust ingredients: almond flour, coconut oil, a bit of salt, and optional granulated sweetener (like erythritol).Pulse to combine, until you’ve got a sticky dough that holds together when pressed.

Coconut oil is a great plant-based fat substitute for butter, rich in saturated fat and also a solid at room temperature. And, since grain based flours aren’t ideal for a keto friendly pumpkin pie recipe, almond flour is the perfect grain free substitute! Low in carbs, rich in dietary fat, and with plenty of fiber to keep the overall net carbs low.

Once the gluten free pie crust dough is sticky, press it into a 9-inch pie plate, crimping the edges with a fork if desired. Also, poke some holes into the bottom of your vegan keto pie crust to prevent it from bubbling in the oven!

Finally, cover the pie crust with a piece of parchment weighed down with pie weights and prebake at 350°F (180°C) for about 12 minutes, until it’s just lightly cooked and golden.

Finally, once your prebaked low carb pie crust is done in the oven, set it aside and allow to cool for at least 20-30 minutes. This is important to avoid a crumbly crust!

While it cools, turn the oven temperature down to 325°F (160°C) and make your sugar free dairy free pumpkin pie filling.

How to Make Vegan Pumpkin Pie Filling with No Eggs, No Dairy, No Sugar

Making the vegan pumpkin pie filling is definitely the easiest step of all. Simply add all of your filling ingredients into a food processor and blend until well-combined! Then, let it sit for about 10 minutes to give the glucomannan time to thicken.

Again, you can—and should—absolutely make this keto pumpkin pie with real pumpkin puree and it will still be keto friendly. (See nutritional stats at the bottom of the recipe). But, I do also recommend using coconut cream or FULL-FAT coconut milk—not “light”—to get that luscious, custard-like texture and those nutritious fats.

Once your low carb pumpkin pie filling has thickened a bit, pour it into your cooled gluten free pie crust and spread into an even layer. Give the dish a few firm taps to release any air bubbles, and it’s ready to bake!

You may want to check on it after 40-45 minutes to see how it’s doing. If the crust is browning too much or looking like it’s starting to burn, cover the edges with foil or a silicone pie crust protector.

As for how to tell when a pumpkin pie is done baking, you want the filling to be set—as in not too soft or liquid-y—but still slightly jiggly in the center. But, you do NOT want it to be puffing up like a soufflé—that means it’s overbaked!

Once it’s done, pull your gluten free sugar free pumpkin pie out of the oven and allow it to cool completely at room temperature. If you transfer it to the fridge before it’s completely cooled, it may affect the texture of your pie and crust.

And again, once it’s cooled, I recommend refrigerating your vegan keto pumpkin pie overnight before you slice it and serve it. At minimum, refrigerate it for a few hours before serving, but overnight is best! Giving it some solid hours in the fridge will ensure you serve up the BEST low carb pumpkin pie recipe possible. 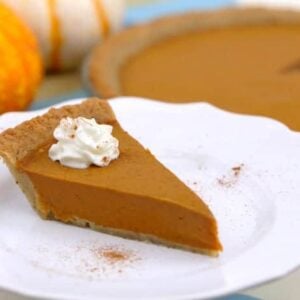 Per 1 Slice of Vegan Keto Pumpkin Pie made with Erythritol:

END_OF_DOCUMENT_TOKEN_TO_BE_REPLACED 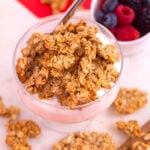 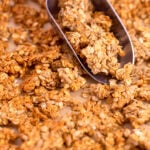 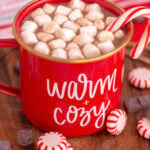 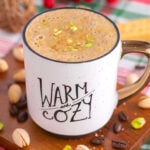 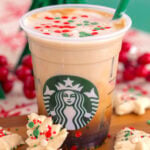 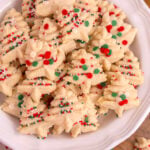