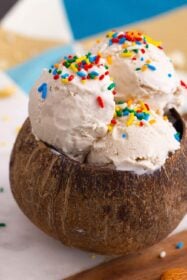 How to Make Vegan Coconut Ice Cream without a Machine

This sweet, satisfying, homemade vegan ice cream requires only 6 main ingredients and NO ice cream machine! With a rich base made of coconut milk and your choice of almond or cashew milk, it’s irresistibly creamy and so simple. Learn how to make vegan coconut ice cream with no churning needed, in 4 tasty flavors: vanilla, chocolate, strawberry, and cookies & cream!

Often, homemade vegan ice cream turns out not-so-creamy and/or too icy. And typically, this is because the water content is too high, and it’s missing the rich fat content found in traditional dairy ice creams. On top of that, when you’re working with a NO CHURN vegan ice cream recipe, there’s no mechanical help to create that creamy texture we all crave.

But, even without churning, that creaminess is possible with the help of coconut milk! This vegan coconut ice cream includes full-fat coconut milk combined with either almond or cashew milk. The result: a thick, fat-rich base that becomes deliciously creamy upon freezing.

Yes, this vegan coconut ice cream does still taste like coconut. But, combining the coconut with another nut milk helps to mellow out the flavor, so you can have fun creating your favorite ice cream flavors! I’ll show you how to make homemade vegan ice cream without a machine, in just a few minutes of prep and a few hours in the freezer.

My Go-To Nut Milk for No Churn Vegan Ice Cream

Yes, there are loads of nut milk options at the grocery store. But, so many contain preservatives and unnecessary additives, and they don’t retain much of the actual nutrient content from the nuts because they’re so watered down. And, for a homemade vegan ice cream recipe, that added water and reduced fat aren’t ideal.

So instead, I use JOI’s almond or cashew plant base to make my own nut milk at home, just by blending the nutbase with water! JOI stands for Just One Ingredient, because each plant base is made with just almonds or cashews. And, I can adjust the ratio of nutbase-to-water so my nut milk turns out as thick, creamy, and fat-rich as I want for making ice cream!

To use a store-bought nut milk instead, simply substitute JOI plant base and water for ⅓ cup of your nut milk. But, just know that the texture of your vegan coconut ice cream may be different due to a lower fat content and higher water content. So, I highly recommend giving JOI plant bases a try, and you can enter the code “MINDOVERMUNCH10” at checkout for 10% off!

How to Make Vegan Ice Cream with Coconut Milk, No Machine

Below, you’ll find the basic recipe for my homemade vegan ice cream with coconut milk, starting with a classic vanilla bean flavor. But, you can also use the same vegan coconut ice cream base to create different flavors! Just replace the vanilla flavoring ingredients with the chocolate, strawberry, or cookies & cream flavorings as listed at the bottom of the recipe. 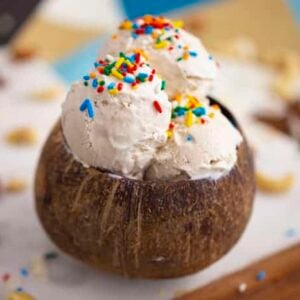 Provided below for vegan vanilla ice cream made with JOI cashew base.
Calories: 199kcal, Carbohydrates: 15g, Protein: 2g, Fat: 15g, Sugar: 11g
Author: Alyssia Sheikh
Course: Dessert
Cuisine: American
Did you make this recipe?Share a photo and tag us @mindovermunch — we can't wait to see what you've made!