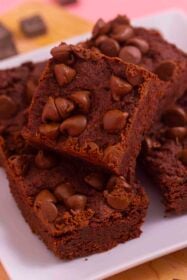 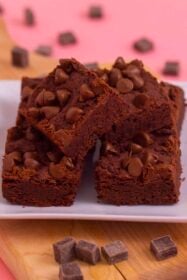 How to Make Homemade Brownies without Eggs

These homemade eggless brownies are so deliciously chewy & cakey—you’d never guess there are no eggs in them! Irresistibly crisp around the edges, not too fluffy and not too dense, just a perfectly chewy, chocolaty, satisfying bite. I’ll show you to make homemade brownies without eggs in under an hour.

Yes, the average brownie recipe calls for eggs—including those just-add-eggs-and-oil boxed brownies that somehow always turn out delicious. Whether you’ve got an egg allergy or sensitivity, or you’ve just run out of eggs in the fridge, this eggless brownie recipe will NOT disappoint! Honestly, the first time I made these they instantly became my favorite brownies.

Just like with all baked goods, there’s a spectrum of brownies with room for variety. Some are richer with more cocoa flavor, others are more milk chocolaty. Some folks prefer dense and fudgy brownies, others (like myself) prefer a chewy, cakey brownie. That’s why these eggless brownies have captured my heart: they taste just as good as any classic brownie, but nixing the eggs results in that cakey texture I crave!

What makes brownies cakey vs. fudgy?

So, to make brownies fudgier, a recipe will often incorporate more oil, less flour, as well as less liquid. In contrast, cakey brownies—like this eggless brownies recipe—will use little to no oil and often use butter instead. In addition, cakey brownies will use more flour, while also adding some liquid to the recipe, like milk.

Try some of my other brownie recipes!

What happens to brownies without eggs?

Still, fudgy or cakey, almost all classic brownie recipes involve eggs—including those boxed brownies. Why? Because eggs contain protein which acts as a binding agent to prevent the brownies from crumbling, as well as fats which help to give the brownies some rise. In addition, eggs add moisture to the batter which prevents the brownies from turning out hard or dry.

So, if we want to make brownies without eggs, we need to adjust the typical ingredients and incorporate some substitutions to fill in for their role. There are some 1-to-1 baking substitutions for eggs that you can try in standard recipes—like flax eggs, mashed banana or applesauce, yogurt, etc. But for this eggless brownies recipe, I adjusted several different ingredients to compensate for the eggs.

How to Make Brownies without Eggs

Can milk replace eggs in brownies?

Partially, yes! Milk won’t work as a singular, 1-to-1 substitute for eggs, but it is one of the additions I’ve incorporated to make these brownies without eggs. Just like in most cake recipes, adding milk to this batter results in a cakier texture! And, the milk adds moisture to the batter along with a bit of protein that act as a binding agent. Personally, I’ve only tested this recipe using whole or 2% milk, but it will likely also work using a nondairy milk.

Bonus: If you’re not a fan of super-rich brownies with a lot of cocoa flavor, adding milk helps to create a more milk chocolaty flavor. I love the flavor of these eggless chocolate brownies, especially with some additional milk chocolate chips sprinkled on top!

Can butter replace eggs in brownies?

Again—partially, yes! Alongside the milk, butter helps to substitute for the eggs in these eggless brownies. Butter is a great source of fat that helps to hold the brownies together, and it gives them some aeration that helps them rise. Plus, whisking up the melted butter with sugar first thing adds an extra dose of fluffy goodness to the batter!

What else can I bake without eggs?

For more egg free recipes and eggless baked goods, try some of these goodies: 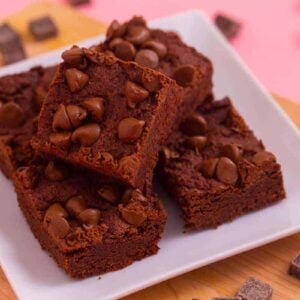 Explore your relationship with food and discover what food freedom means to you in my Food Freedom course!