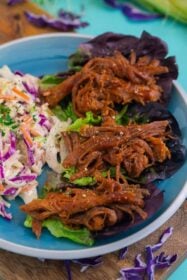 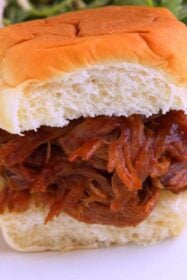 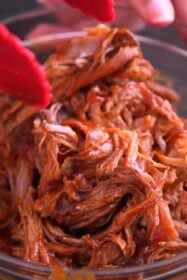 This deliciously tender slow cooker pulled pork recipe is such an easy and tasty protein option! Not only is it super simple and great for meal prep, but it’s also so versatile. Toss it in your choice of BBQ sauce then pile it onto a bun, into tacos, or serve it up in whole30 pulled pork lettuce wraps! I’ll show you how to make pulled pork in the slow cooker or crock pot, plus my favorite BBQ sauces—including paleo & whole30 compliant options.

The best part about this slow cooker pulled pork recipe is it’s straightforward and very forgiving. Made with pork shoulder / pork butt—which are both relatively tough and fatty cuts—the meat is meant to be cooked for a long time to get that tender, melt-in-your-mouth texture. Honestly, the biggest challenge with making crock pot pulled pork is waiting 9 hours for it to cook and smelling it all the while!

Once it’s cooked, you’ll have irresistibly juicy, flavorful meat that can feed the entire family, or feed yourself all week. I’ll share some of my favorite slow cooker pulled pork meal ideas below, including my go-to whole30 BBQ pulled pork meal with a side of paleo coleslaw.

What Can I Use for Pulled Pork in the Slow Cooker?

Cooking pulled pork in the slow cooker is one of the easiest protein preparations that you can do. All you’ll need is your cut of pork, salt, pepper, and your slow cooker / crock pot. That’s it! So, which cut of pork should you use?

What is the best cut of meat for pulled pork?

Generally, your best bet for crock pot pulled pork is to use pork shoulder or pork butt—either bone-in or boneless cuts works great. Both of these are pretty tough cuts that are rich in fat, so they do best when cooked slowly, for a long time, and on low heat. Hence, why they’re ideal for a slow cooker pulled pork recipe! Slow cooking allows the proteins in pork shoulder / butt to break down properly, creating that tender, juicy meat that we crave.

Now, although it may sound like these cuts come from opposite ends of the animal, both actually come from the shoulder of the pig. In other words, “pork butt” doesn’t come from the animal’s rear end. The entire shoulder is divided into 2 sections: “pork butt” is higher on the foreleg, while “pork shoulder” is further down. The actual hindquarters of the pig are carved into fresh “hams.”

Ultimately, the best cut of meat for pulled pork is either pork shoulder or pork butt, and they can go by many other names:

What can I use instead of pork shoulder for pulled pork?

Some folks want to use pork center cut loin roast for pulled pork, but I don’t recommend it. Unlike pork shoulder or pork butt, pork loin is much lower in fat, so it isn’t ideal for slow cooker pulled pork. Yes, it is possible, but you’d have to try roasting at a lower temperature to avoid overcooking it—otherwise you’ll end up with pulled pork that’s very dry.

How many pounds of pork do you need per person?

On average, a 4-5-pound cut of bone-in pork shoulder / butt will yield around 2-3 pounds of pulled meat, which could feed anywhere from 6-12 people. Of course, this will depend on you, who you’re feeding, and your preferences! Some people may want 4oz of meat, others may want 8oz.

For gatherings, I recommend overestimating and assuming each person will eat around ⅓-pound (5.3oz) of meat. So, think of it as though each 1 pound of slow cooker pulled pork will feed 3 people. If you’ve got a 5-pound bone-in pork shoulder, I’d estimate that its ~3 pounds of pulled meat will feed ~9 people.

Do you need liquid in slow cooker for pulled pork?

No, you don’t need to cook your pork shoulder / butt in any liquid! The beauty of pulled pork is that it’s so juicy and tender, thanks to the rich fat content of the pork shoulder. Some of that fat also renders off as liquid as it cooks, so the pork ends up cooking in the deliciousness of its own broth. Now, keep in mind, if you use a leaner cut like pork loin, you may want to consider adding some liquid to the slow cooker.

How Long to Cook Pork Shoulder in Slow Cooker

Generally, the best way to cook pork shoulder in the slow cooker is on low heat, for 9 hours. Cooked on low heat, the pork shoulder will get more tender the longer that it cooks! Yes, you can cook the meat on high heat for 4-5 hours if you’re in a time crunch. But, just know that your pulled pork recipe won’t turn out nearly as juicy or tender with the high heat method. I know, the hardest part is the waiting—but it’s well worth it!

Should I drain fat from pulled pork?

Before cooking, do not trim the fat from your pork. The fat is essential to keeping the meat juicy and flavorful as it cooks! After cooking, you’ll be left with a slow cooker full of tender pork shoulder, as well as liquid that’s rendered off. At this point, remove the pork from the liquid, shred the meat, and transfer it into a container. BUT, don’t throw away that liquid just yet!

How do you moisten pulled pork?

How to Make BBQ Pulled Pork

With your crock pot pulled pork shredded and ready, simply select the portion you intend to eat or serve and toss it in your favorite BBQ sauce! I find that around 1 cup of BBQ sauce per 1 pound of pulled pork is a pretty good ratio to start with. If the pulled pork is still warm and fresh out of the slow cooker, you may not need to reheat it. But if the meat is coming from the fridge, toss it in barbecue sauce and then heat it in the microwave or over the stove.

Personally, my favorite BBQ sauce brand is Stubb’s. The Stubb’s Original BBQ Sauce is delicious, it’s pretty “clean,” and it’s only got 4g of added sugar per serving. Or, when I’m craving a sweeter option, I love Stubb’s Sticky Sweet BBQ Sauce! Of course, the idea is to use whichever barbecue sauce that you enjoy! For those looking for paleo or whole30 BBQ pulled pork options, I share some of my favorites below.

If you’re a BBQ lover on paleo or doing the whole30, you’ve probably learned by now: most mainstream barbecue sauces come with added sugars and generally are not compliant. Thankfully, in recent years, more and more brands have started to create paleo & whole30 compliant BBQ sauces! Below, I’ve listed several BBQ options for whole30 pulled pork that contain no added sugars or other additives. My personal top choice is Tessemae’s, which has a milder flavor, but I also enjoy Primal Kitchen when I want a more peppery, vinegary flavor.

Whether you serve your slow cooker pulled pork plain, tossed in BBQ sauce, or otherwise, there are plenty of fun meal options to explore! 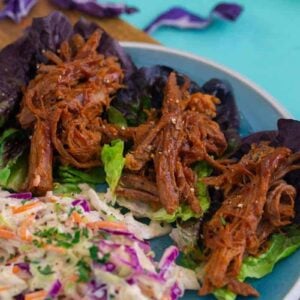