For some of us, it’s the bloating and bellyache after polishing off half a block of cheese. Then, there are others who get a headache after eating a bowl of pasta. Sadly, even when we LOVE certain foods, they’re not always the best of friends with our bodies. WHY?? We know that food allergies exist, which we can typically diagnose with a blood test. But, there are also some common food sensitivities, and they can be tricky to recognize.

Now, this isn’t a full-blown, throat-closing allergic reaction to certain foods. Symptoms of common food sensitivities tend to be more mild, like gas, cramps, or nausea. But, even though these symptoms can seem minor (we may not even notice them), they can have serious consequences on our health. Those symptoms are signals from our body that something’s not quite right. So, we need to listen to them! Because, if we let a food sensitivity go unchecked and keep eating that food, we can do damage to our bodies.

Do you have any food sensitivities? Learn how you can find out!

What Are Food Sensitivities?

If you have a food sensitivity, that food produces a not-so-great reaction in your body. And, this can range from tummy troubles, to gut inflammation, to a full-blown allergic reaction in some people. If you have a specific food allergy, gluten-intolerance, or lactose-intolerance, you’re probably very aware of those sensitivities. But, we’re not talking about allergies here. Many people have these common food sensitivities or mild intolerances, but don’t even realize it.

And, that’s because we often don’t connect the food we eat to the symptoms we experience, like:

Why Are We Sensitive to Certain Foods?

A person is sensitive to a certain food because their body mistakes it as something harmful or dangerous. So, anytime we eat those sensitive foods, our body sounds an alarm. Then, our immune system responds to those ‘dangerous’ foreign invaders, just like it would respond to bacteria or a virus. That’s why we experience those uncomfortable symptoms. But, if we eat foods that we’re sensitive to frequently, our immune system has to fight that battle ALL the time. And, this can lead to gut strain, inflammation, and even the development of autoimmune diseases.

The short answer: just about everyone. And, you could go through your whole life without knowing it. Generally, most of us get used to the way our bodies feel and accept it as normal. So, we don’t ever question the foods we’re eating—especially because many of these foods are considered healthy! And, these common food sensitivities don’t necessarily affect everyone else the same way.

Sure, we hear all the time that foods like whole grains, dairy, or even tomatoes and peppers are healthy. But, if you have a food sensitivity, the same rules don’t apply. And, common food sensitivities like these can be more problematic for people with:

If you fit into either of these groups, these foods are more likely to cause problems for you. (Although, it’s not 100% guaranteed that they will.) But, even if you don’t fit into either of these groups, common food sensitivities can still affect you and put strain on your digestive system. And, that constant strain can lead to inflammation and conditions like leaky gut—which can then lead to autoimmune diseases…

What Are Autoimmune Diseases?

Autoimmune diseases develop over time, as our immune system keeps working and working on overdrive. And, that constant state of attack and inflammation can do serious damage to our tissues and organs. There are over 100 different autoimmune diseases, and they tend to target specific organs or areas of the body. Here are a few of the most common:

Doctors and researchers aren’t yet sure of exactly why autoimmune diseases develop. But, we do know that:

If you think about it, this is pretty logical. Common food sensitivities set off our immune response. Then, we may experience mild symptoms, but nothing severe enough to question the food we ate. And, if we continue eating these sensitive foods, our immune system has to keep fighting and fighting. That constant battle can overwork the immune system, and it may go haywire. Plus, researchers are discovering that straining the gut in this way can make matters much, much worse.

What Is Leaky Gut?

Newer evidence shows that gut permeability—a.k.a. “leaky gut”—can lead to the development of all sorts of autoimmune diseases. Our gut lining is the barrier that stops toxic foreign invaders from escaping into the bloodstream. And, a healthy gut lining lets very few things (mostly nutrients) pass through. But, our tightly-packed gut cells can loosen, making our gut lining more permeable—a.k.a. “leaky.” Changes in our gut bacteria, inflammation in the gut, and even foods that cause us digestive strain can contribute to leaky gut.

Then, living with a leaky gut, some of our food remains undigested and fermenting in the body. And, more and more ‘foreign invaders’ can leak out of the gut and into the bloodstream. Of course, this causes the immune system to launch its attack of antibodies and inflammation—pretty much whenever we eat. Recently, research has shown that gut permeability is extremely common in people before an autoimmune disease develops. And this is true in people with AND without genetic susceptibility.

So, why does this matter? For people with common food sensitivities, eating those sensitive foods strains the gut. And, the more we strain the gut, the more damage we do to our gut lining. The more we damage our gut lining, the more permeable it becomes. Then, we may develop leaky gut—which can not only lead to uncomfortable digestive problems, but also autoimmune diseases.

The Power of Nutrition

Autoimmune diseases and leaky gut can all sound pretty terrifying, and they kind of are)… But, we’re not entirely powerless. We CAN take action to protect or improve our health by feeding ourselves wisely. If you don’t have an autoimmune disease, a healthy anti-inflammatory diet can help prevent them from developing.

(Learn about the 17 Anti-Inflammatory Foods Your Body Needs NOW!)

But, if you already have an autoimmune disease (or fear that you might), changes in your diet can alleviate or even eliminate some symptoms. And, our bodies do have the capacity to heal and repair—including a leaky gut lining. By understanding your individual food sensitivities, you can make life a whole lot happier and healthier for your good ‘ol gut. So, what are the common food sensitivities you should be on the lookout for?

How to Figure Out If You Have a Food Sensitivity

Unfortunately, unlike with allergy tests, there’s no objective measurement we can take to determine a food sensitivity. So, YOU have to run some tests on yourself. The best way we can identify common food sensitivities is with an elimination diet. If you suspect you’re sensitive to a certain food (or several), cut it out of your diet. Then, over the course 1-2 weeks, see how your body responds.

How do you feel physically? Mentally? Emotionally? Are you noticing any changes in how your stomach feels, or in your digestion? For the best results, keep a journal of some kind to keep track of each day. Write down the foods that you eat, whether or not you exercise, your mood—anything that might affect your digestive symptoms. (Also, pardon the grossness, but it’s a good idea to pay attention to any changes in your stool/bowel movements.) And, if you notice some symptoms still sticking around, take note of them.

Then, after that 1-2 week period, you can try reintroducing that food back into your diet to see how your body responds. If you don’t see old symptoms and digestive problems flare up again, you probably aren’t so sensitive to the food! Or, if you don’t notice those old symptoms change much during your elimination period, you may have a sensitivity to something else you’re eating. And, you can always try an elimination diet to test for other common food sensitivities, too. But, if you reintroduce a food and start experiencing the same old problems once again, you’ve at least discovered one of your food sensitivities. 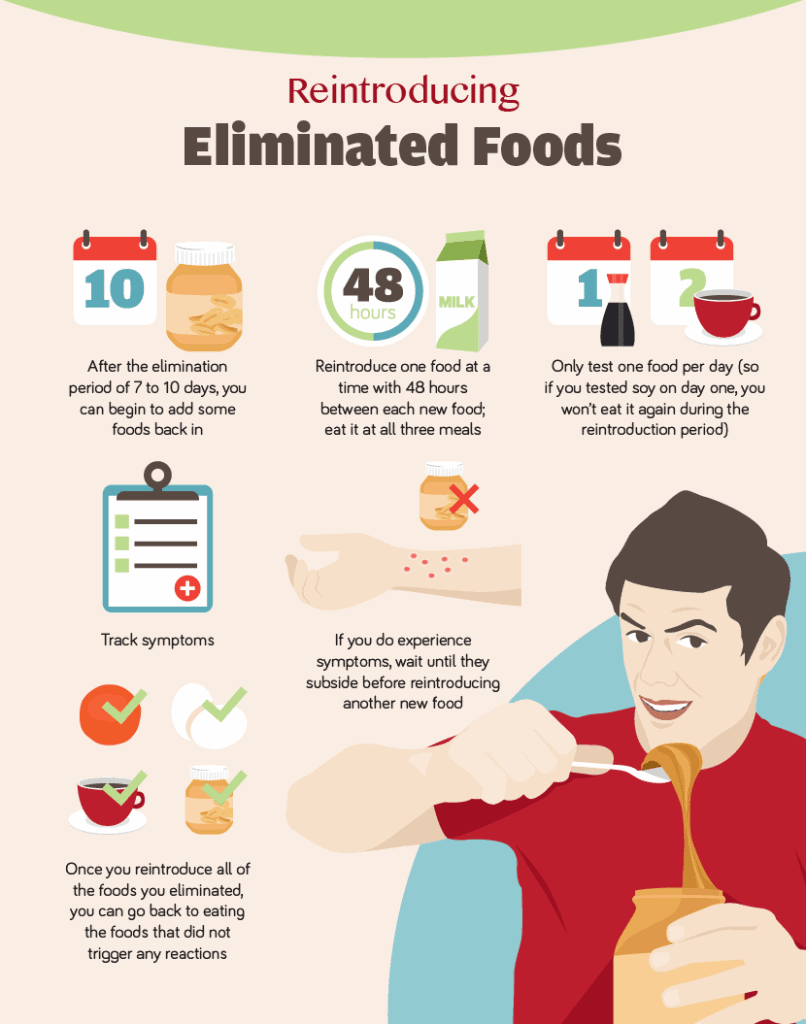 You’ve Got The Power

Remember: common food sensitivities aren’t just about bloating and stomach aches. These are signals from our bodies. Pay attention to how you feel when you eat these foods, and listen to what your body is telling you. And, if you deal with digestive problems or an autoimmune disease, it’s especially important to tune in to your body’s signals. If we make the effort to understand our bodies, we can gain some control over our long-term health.

You’ve got the power! (Everybody dance now.)

Keep your gut happy, healthy, and inflammation-free! Learn about the 17 Anti-Inflammatory Foods Your Body Needs NOW