Sweet, fluffy, pumpkin-y goodness—these adorable mini pumpkin whoopie pies are a must-try for the fall season! The light-and-springy pumpkin spice cookies are divine enjoyed all on their own. But, they’re even better with that creamy, cinnamon-spiced frosting sandwiched in between. I’ll show you how to make pumpkin whoopie pies with cream cheese filling for a fun, festive holiday dessert!

If you’ve never heard of or tried whoopie pies before, they’re a soft, cakey type of sandwich cookie that’s just plain good. Sort of like a gourmet version of an oatmeal cream pie, these homemade pumpkin whoopie pies are seriously next-level delicious. The pumpkin cookies are so light, almost a cross between a cake and cookie, with plenty of frosting in every bite.

I wanted to make this pumpkin whoopie pie recipe as a fall-time treat, but whoopie pies are actually a traditional dessert with Amish origins. Legend has it, they were originally made from gobs of leftover batter. And, when these treats were made, children would be so excited that they’d shout “whoopie!” Hence, the common names ‘whoopie pies,’ ‘gobs,’ and ‘gob cakes.’

And, I’ve gotta say, this recipe definitely turned out to be worth a few “whoopies!” You’re welcome to make just the fluffy pumpkin spice cookies, and I personally could eat those all day long. But if you’re open to it, I highly recommend trying these pumpkin whoopie pies with the cream cheese filling for added fall flavor and fun!

How to Make Pumpkin Whoopie Pies with Cream Cheese Filling

One of the great things about these mini pumpkin whoopie pies is, as impressive as they look and taste, they’re super simple to make. From prepping the dough to baking the pumpkin spice cookies to whipping up the cream cheese filling—you can get it all done in just over 30 minutes!

First, make the pumpkin spice cookie dough. In a large bowl, whisk together flour, baking powder and soda, and seasonings. In a separate bowl, beat together softened butter and Truvia® Sweet Complete™, using a hand mixer on medium speed for about 2 minutes.

Once that’s mixed together, add one egg at a time, beating well to integrate each. Then, beat in your pumpkin puree and vanilla. Once smooth, pour in half of the dry mixture and beat until integrated. Then, repeat with the other half of your dry mixture. Finally, you’re ready to scoop the dough and bake!

The dough in this pumpkin whoopie pie recipe will be soft, so grab a spoon or cookie scoop. Simply drop heaping spoonfuls of the dough onto a lined and sprayed baking sheet. Then, pop your trays into the oven at 350°F (180°C) for 13-16 minutes. They’ll be light and springy to the touch when done, but be sure to let them cool completely before working with them.

Of course, you can make the pumpkin spice cookies and devour them all on their own—and that would not be a mistake. But, taking the few extra minutes to make the complete pumpkin whoopie pies with cream cheese filling is more than worth it!

It’s as easy as beating together softened cream cheese, butter, vanilla, cinnamon, and nutmeg with a hand mixer on medium speed. Once fluffy, add in Truvia® Confectioners Sweetener gradually, beating in just ½ cup at a time. When everything is integrated and whipped to your liking, you’re ready to assemble.

Starting with a cooled pumpkin cookie, spread a heaping spoonful of cream cheese frosting onto the flat side of the cookie. Then, top that with a second cookie to make a sandwich and gently press together. Clean up the edges as needed. Repeat until you’ve assembled as many of your pumpkin whoopie pies as you’d like!

Now, you can assemble all of your pies at once, but I think it’s best to assemble just as many as you plan to eat immediately. Your fluffy pumpkin spice cookies will stay fresher and springier if you store them un-frosted. And, the cream cheese filling tastes best when it’s freshly whipped.

Check out my Holiday Cookies for All Season Long video to see how this recipe is made, along with my Cut Out Holiday Sugar Cookies & Classic Thumbprint Cookies! 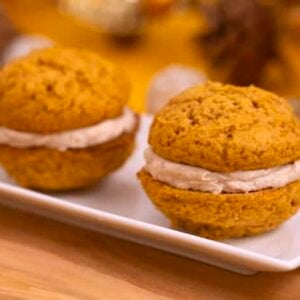