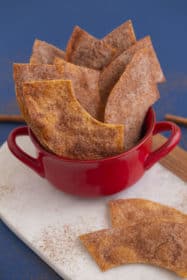 How to Make Bunuelos with Flour Tortillas in the Oven

These baked bunuelos chips are crispy cinnamon sugar tortilla chips that taste deep fried! A spinoff on traditional Mexican buñuelos, this baked-not-fried version is both lighter and simpler to make—without sacrificing on indulgent flavor. Flaky, crispy, buttery, and totally irresistible. Learn how to make bunuelos with flour tortillas in the oven.

I know, and I agree: a baked dessert is not the same as a deep fried dessert. These baked bunuelos chips do absolutely taste different than the traditional Mexican dessert. But, health and nutrition aside, this oven-baked recipe is so tasty and just plain easier to prepare. No fussing with a pot of oil, no making dough from scratch. You can have these sweet cinnamon sugar chips ready in minutes!

This is a quick and easy dessert that you can throw together anytime, or it’s a great way to use up extra or leftover tortillas. Personally, I came up with this recipe when I had tortilla scraps leftover from making my homemade crunchwrap recipe! Baked bunuelos are the perfect sweet ending to a burrito night or a taco Tuesday.

What are bunuelos made of?

Traditionally, Mexican buñuelos are a fried dough dessert covered in cinnamon sugar, often flattened into crispy disks. The classic recipe involves deep-frying, but these baked bunuelos chips can be made in the oven! And, rather than making a dough from scratch, this homemade bunuelos recipe uses flour tortillas, brushed with melted butter and sprinkled with cinnamon and sugar.

How to Make Bunuelos with Flour Tortillas

How do you reheat Bunuelos?

Personally, I think these baked bunuelos chips are delicious enjoyed warm or cold! But, if you prefer to reheat your homemade bunuelos to enjoy them warm, I recommend doing so in the oven or toaster oven. Simply reheat for a few minutes at 350°F (180°C), until they’re warm to the touch and crispy as you’d like.

See how to make bunuelos chips in my Copycat Taco Bell Crunchwrap video! 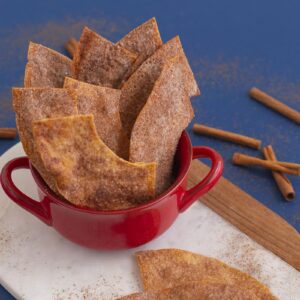