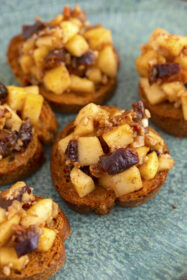 For a fun & festive twist on a traditional charoset recipe, serve it as a crispy holiday crostini appetizer! Unlike the classic apple and walnut charoset for Passover, I made this sweet fruit & nut dip with prune juice instead of wine, and served it on a crostini instead of with matzah crackers. A unique & inclusive appetizer idea for a holiday party that honors more than Christmas.

Charoset (pronounced har-o-set) is a sweet dip or relish made of fruit, nuts, & wine, and it’s one of the symbolic foods eaten as part of the Passover Seder plate. Passover is a Jewish holiday commemorating the freeing of the Jews from slavery in Egypt. And charoset—from the Hebrew word cheres, meaning “clay”—symbolizes the mortar the enslaved Jewish people used to build the pharaoh’s buildings. Passover occurs in the spring, but a friend of mine suggested incorporating charoset as a crostini topping in my winter holiday party menu, and I loved the idea!

What do you eat with charoset?

Charoset is traditionally served cold with matzah crackers, and it’s eaten along with several other symbolic foods at the Passover Seder. But for a winter holiday party twist, I served this apple walnut charoset on little crostini toasts.

My intention here wasn’t to replicate traditional charoset, but to create a charoset-inspired dish that honors Jewish culture. Growing up in a multicultural home, I’ve experienced how this Christmas-focused time of year can feel isolating. That’s why I like to diversify a holiday party menu with dishes like my nostalgic baklava bites—and this charoset crostini!

How to Make Crostini at Home

In Italian, crostini means “little crusts” or “little toasts,” and that’s exactly what crostini are: little toasts made from a bread with a crust! Although you can buy premade crostini at the grocery store, it’s super easy to make your own crostini at home with just a baguette, oil, and salt.

How to Serve Holiday Crostini with Charoset

Once you’ve tossed together your charoset, and your crostini are done toasting, you’re ready to serve! For a readymade option, you could serve the charoset on top of your crostini toasts, so guests can just grab a crostini and go. But for my holiday party appetizer, I decided to serve the charoset and crostini toasts next to each other in separate bowls. That way, everyone could assemble their own crostini with charoset and the toasts didn’t get soggy. You could also serve matzah crackers alongside the crostini—or any other dippers you like! 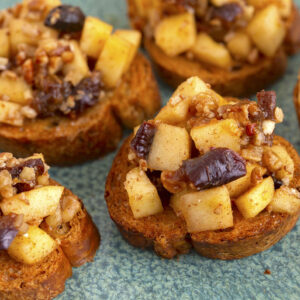 How to Make Charoset