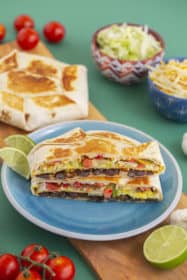 How to Make a Black Bean Crunchwrap Supreme

Once upon a time, I used to be a huge fan of Taco Bell and I would eat there multiple times a week. One of my go-to meals was the crunchwrap supreme because it was like a crunchy quesadilla meets hearty burrito. Now I’ve fallen in love with making homemade crunchwrap supremes because they’re so much better and tastier than the fast food version!

Is the Crunchwrap Supreme vegan?

No. Typically, the classic Taco Bell Crunchwrap Supreme features your choice of meat, nacho cheese sauce, lettuce, tomatoes, and sour cream—the majority of which are not vegan. But, both the tortillas and tostada shells are vegan! You can order a vegan version by asking for the black bean crunchwrap supreme with no cheese sauce or sour cream.

How to Make a Vegan Crunchwrap Supreme

To make a vegan crunchwrap supreme at home, the process is simple: assemble your filling ingredients, cut your tortillas to size, and then fold up the crunchwraps and cook!

How to Fold a Vegan Crunchwrap

With your fillings stacked up and your small tortilla circle placed on top, start by folding up one edge of the large tortilla. Press the folded side down flat, then fold that edge up to create a “pleat.” Continue all the way around, pressing, folding, and pleating until it’s assembled. Place the finished crunchwraps seam-side down onto the griddle and let them seal over the heat!

See how to make a vegan crunchwrap supreme in my Copycat Taco Bell Crunchwrap video! 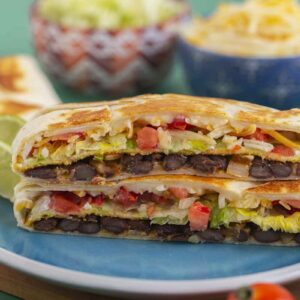