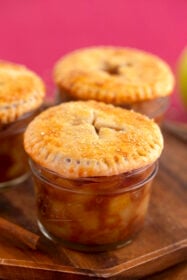 How to make apple pie in a mason jar – with sweet apple pie filling inside, and a comforting mini pie crust baked on top! These mini mason jar apple pies are quicker to bake than a full pie, they’re perfectly portion-sized, and they’re a tasty lightened-up option with less pie crust overall. An adorable single-serving dessert idea for a holiday party or gathering!

What is apple pie in a jar?

On the one hand, there are home-canning recipes for apple pie filling in a jar—which is essentially sliced apples stored in a spiced sugar syrup, ready to bake in a pie crust. But this is a baked apple pie in a mason jar, complete with a cooked apple pie filling and a pie crust on top. Unlike some “health-ified” apple trifles or apple crisp recipes that use granola instead of pie crust, this is a real-deal apple pie—made miniature!

Can you bake in mini mason jars in the oven?

Although mini mason jar pies are adorable, it’s important to note that most mason jars are technically not oven-safe. Popular brands like Ball and Kerr mason jars are sturdy enough for the dishwasher, but the glass isn’t tempered. That means they’re not designed to withstand the heat in an oven, and there’s a risk they might shatter. That said, I personally did bake my mini apple pies in mason jars, and they turned out great. For the safest option, invest in some oven-safe glass jars for baking, or bake your mini apple pies in small ramekins.

The simplest way to make apple pie in a mason jar is to cover just the top of each jar with pie dough. This option lightens up the recipe, and it has the best crust-to-filling ratio—so you get some pie crust, but not too much relative to the apple filling. If you want more crust than this, you could also line the bottom and/or sides of each jar with pie dough. This option will just require more work, and I think there ends up being too much crust for such a small portion. Option 1 is easier, Option 2 gives you more pie crust to enjoy—choose the option that feels right for you!

How to Make Apple Pie in a Mason Jar

You can see my step-by-step process for making these mini mason jar pies in my Holiday Finger Food Desserts video! 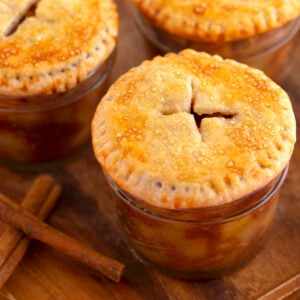