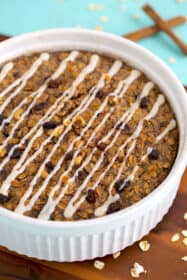 Warm, gooey, & unbelievably bready—this healthy cinnamon roll oatmeal bake tastes like the center of a slightly-undercooked cinnamon bun! Incredibly comforting but not overly sweet, even with that crave-able glaze drizzled on top. Customize with walnuts, raisins, or your favorite mix-ins! Learn how to make cinnamon roll baked oatmeal with rolled oats & a simple cream cheese glaze.

Check out more of the Best Baked Oatmeal Recipes, or try my Easy No Yeast Cinnamon Rolls!

What is a cinnamon roll oatmeal bake?

Cinnamon roll baked oatmeal is like a fluffy oatmeal casserole filled with cinnamon roll-inspired flavors. Rich cream cheese, brown sugar, and plenty of cinnamon—with crunchy raisins & walnuts mixed in. And of course, topped with a sweet glaze! Unlike a cinnamon roll pastry, this healthy oatmeal bake is more like a bowl of oatmeal, baked in the oven. An easy, low-stress breakfast made with nutritious whole grains!

Making this recipe vegan requires a number of substitutions, but it is possible! Instead of butter in the casserole, use coconut oil. Substitute for the 1 egg + 2oz cream cheese with 2 flax eggs, or with ½ cup mashed banana, applesauce, pumpkin puree, or sweet potato puree. Finally, either skip the cream cheese glaze or try making a vegan version using non-dairy cream cheese.

How to Make Cream Cheese Glaze

This glaze is like an easy DIY icing you can whip up in under 5 minutes! Just add softened cream cheese, butter, and vanilla to a bowl and beat with a hand mixer. Once smooth, beat in powdered sugar until it’s integrated, then beat in a splash of milk at a time. When the texture is thick but drizzle-able to your liking, glaze your cinnamon roll oatmeal bake and enjoy! I used a squeeze bottle, or you can drizzle it on with a spoon.

Watch how to make this cinnamon roll oatmeal bake & glaze in my Baked Oatmeal 7 Ways video!

How can I make cinnamon roll baked oats ahead of time?

For meal prep, you have two options: (1) Bake the casserole, let it cool, then store as desired in the fridge or freezer. (2) Store the dry ingredients in a sealed container, and the wet ingredients in separate container in the fridge—then wait to combine them, fold in mix-ins, and bake the next morning. 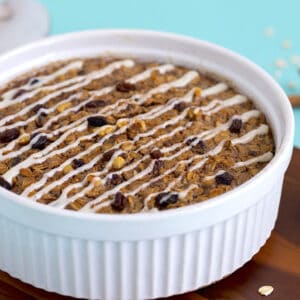