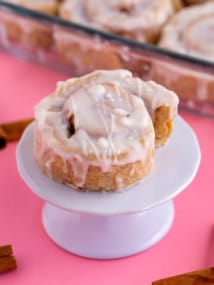 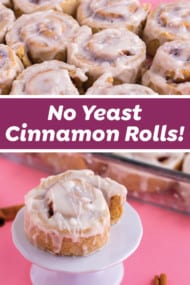 Homemade cinnamon rolls just got a whole lot easier—thanks to this no yeast cinnamon rolls recipe! These are fluffy, flaky, and perfectly satisfying pastries, but with no pesky yeast and no waiting for the dough to rise. Plus, this is such a fun treat to make from scratch and bake at home. I’ll show you how to make cinnamon rolls in under an hour!

Full disclosure, I’m no professional baker. But I am an avid cinnamon roll eater. I understand the importance of yeast and sugar, and the magic they bring to bread-y pastries. However, in my kitchen, simplicity and convenience are key, which is why I’m so excited for you to try this this scrumptious recipe that doesn’t have any yeast or sugar but is still entirely delicious!

At first, I was skeptical that cinnamon rolls without yeast could turn out tasting like the real deal. But, after some recipe testing and tweaking, these yeast-free treats turned out amazingly good – warm and soft inside, perfectly crisp around the edges, and with an irresistibly flaky, cakey bite. Drizzled with some DIY icing, they absolutely satisfy my cinnamon roll hankerings!

Cutting out the sugar in the dough and icing was also an experiment, but Truvia® Sweet Complete™ and Confectioners sweeteners made it an easy swap. They’re both cup-for-cup replacements for sugar (granulated and powdered, respectively) in recipes – talk about simplicity and convenience!

I love that this recipe is quick, so cinnamon rolls are ready to devour in under an hour. But, best of all, this recipe is just plain FUN! You get to make the dough by hand, roll it up into a log, and slice it into satisfying spirals, then slather your warm rolls in icing after baking. Trust me, after making a batch of these cinnamon rolls, you’ll want to come back for more!

For the best, fluffiest texture in these pastries, all-purpose flour is definitely the way to go. I went with the real deal refined flour—that’s my food freedom! I haven’t tried making these cinnamon rolls with an alternative flour, but you’re welcome to experiment.

A whole wheat flour will mostly likely work well in lieu of all-purpose. If you want to use a gluten-free flour blend or oat flour, just know that the texture will be different, and you may need to make other adjustments to the recipe to make the dough work.

I love pastries made with the real-deal flour and butter, but I chose to lighten up the sugar content by using Truvia® Sweet Complete™ All-Purpose Sweetener. This is one of my favorite secret weapons—it’s a combination of stevia leaf extract, chicory root fiber and erythritol that can be used as a 1-to-1 replacement for granulated sugar and a great option for cinnamon rolls without yeast.

Similar to the flour, real butter is the best bet for this recipe! It’s key to giving these cinnamon rolls the fluffy, flaky texture and gooey filling that we all crave. Again, I haven’t tested any alternatives like coconut oil or otherwise, so I can’t speak to whether the dough would work with a replacement for the butter.

Initially, I tested this dough with only butter and no egg, and the result was fairly crumbly and not nearly as tasty. So, for the best results, use the egg! As always, you’re free to experiment with substitutions.

Personally, I used whole milk in this recipe, but any milk should work just fine—including non-dairy options!

For my icing, I chose to skip the sugar for another source of sweetness: Truvia® Confectioners Sweetener! This is made from stevia and erythritol and serves as a substitute for powdered sugar (versus granulated like Sweet Complete™). And, I’ve gotta say, it makes for a perfect DIY icing!

You can find the full no yeast cinnamon rolls recipe below, but here I just wanted to offer a few tips that can help you before you get started. 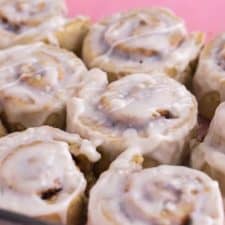 Author: Alyssia Sheikh
Did you make this recipe?Share a photo and tag us @mindovermunch — we can't wait to see what you've made!

END_OF_DOCUMENT_TOKEN_TO_BE_REPLACED 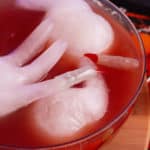 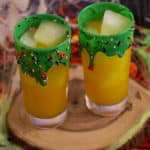 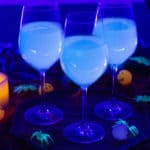 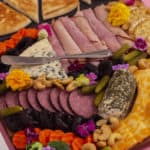 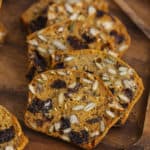 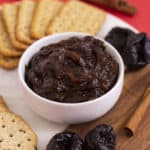